I have just received the report below and the two attachments of the photos and the receipt from Khenpo Rangdol about the Ladakh floods.

Khenpo-la is seen in many of the photos distributing help and surveying the damage.

Thank you so much for all the help that you have brought to these people in Ladakh.

With love and prayers,

Greetings!  Hope this mail finds you well with the blessings lord Buddha and Achi Dolma.

I arrived at Dehradun day before yesterday from Ladakh would like to share the latest news from Ladakh with you.

I was fortunate to be at Ladakh at the same time as HH Dalai Lama. HH visited some devastated areas and gave his condolences to the people and offered prayers for them.  He also led prayers with the Sangha members for the victims of the flash floods and there were thousands of monks at this prayer meeting.

On Sept. 10 I took a flight from Delhi to Leh and went directly to Tingmosgang village.

On Sept. 11 I had an all day meeting with our working committee members regarding the utilization of flood relief funds. We came know that many other NGOs had distributed lots of materials to the flood affected families such as blankets, mattresses and other household stuff.

The flood affected families had been camping out in tents and we learnt that the govt. only gives a limited amount of money for rebuilding damaged or washed out houses. The feedback from the flood affected people suggested that rebuilding their houses was their topmost priority and they needed funds to finish building and stocking their houses for the approaching winter. Therefore, our committee decided to distribute the relief funds by cash and cheque only to those families whose houses had been damaged.

Donations of varying amounts were given to different families depending on their actual needs, ranging from Rs. 40,000 to Rs. 5,000 per family. We did not give the donations as per village committee lists, instead we gave according to their real situation on ground.

Thousands of trees and many fields in the villages had been badly affected by the flash floods. Therefore, some funds were allocated for tree plantation which will only take place when spring comes to Ladakh in 2011. We will urge the people to plant thousands of different kinds of trees.   This tree plantation programme will be
supported by the Achi Dolma Flood Relief Fund. This is essential to prevent soil erosion and to provide fodder  for the animals and firewood for fuel in the villages.

On Sept. 14 and 15 we attended HH Dalai Lama teachings and empowerment of compassion Buddha at Bodh Kharbu village. I was so fortunate to see HH in person and I requested him to visit our Stupa project area next year when he comes to Ladakh.  Surprisingly he agreed to do so.

On the Sept. 16 we visited a village called Sabu near Leh and found that there were 7 families whose had lost their homes entirely and 33 families who had suffered partial damage to their homes. Also we visited some other villages such as Nyimo and Choglamsar where we gave some donations to the relief committee.

The All Ladakhi Gonpa Association will be hosting big puja by inviting all the monks from Ladakh on the 49 th day ceremony of
the flood victims which will be on Sept. 22.  We offered Rs. 50,000 as donation for this prayer ceremony. We also donated Rs. 50,000 to the Youth Committee of lower Ladakh who are working very hard for rehabilitating the  flood  affected families.

All the people who received donations from the Alchi Dolma Flood Relief Fund send their heartfelt thanks to you for supporting them in their hour of need. They said that they will never forget your generous contribution and they pray for a long and prosperous life for you.

Last but not the least we the team of Vision Himalaya would like to thank you very much for all the support received. We also pray for your health, prosperity and spiritual progress. Here I have attached some photos during the distributing donations and some affected areas.  Please share those photos to the donors with the thanking letter.

With lots of prayers
and metta 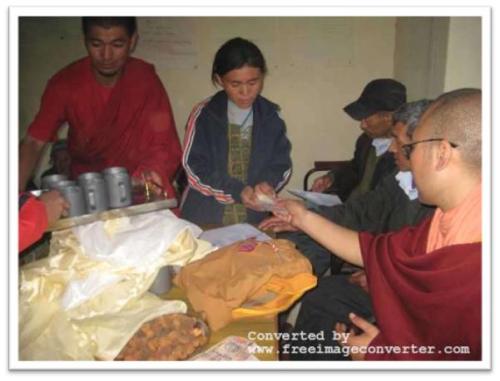